My eye was caught the other day by this advert: 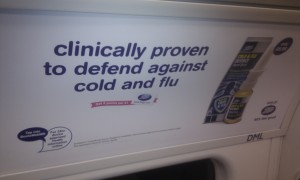 Quite a bold claim, I thought. “Defends against cold and flu” would indeed be impressive, if it were true. Though I also noticed the somewhat meaningless verb “defend”. What does that mean exactly? Does it stop you getting a cold or flu in the first place? Or does it just help you recover faster if you get a cold or flu?

I had a look at the relevant page on the Boots website to see if I could find out more. It told me

“Boots Pharmaceuticals Cold & Flu Defence Nasal Spray is an easy to use nasal spray with antiviral properties containing clinically proven Carragelose to defend against colds and flu, as well as help shorten the duration and severity of both colds and flu.”

It then went on to say

“Use three times a day to help prevent a cold or flu, or several times a day at the first signs helping reduce the severity and duration of both colds and flu.”

OK, so Boots obviously want us to think that it can do both: prevent colds and flu and help treat them.

So what is the evidence? Neither the advert nor the web page had any links to any of the evidence backing up the claim that these properties were “clinically proven”. So I tweeted to Boots to ask them.

To their credit, Boots did reply to me (oddly by direct message, in case you’re wondering why I’m not linking to their tweets) with 4 papers in peer reviewed journals.

So how does the evidence stack up?

Well, the first thing to note is that although there were 4 papers, there were only 3 clinical trials: one of the papers is a combined analysis of 2 of the others. The next thing to note is that all 3 trials were of patients in the early stages of a common cold. So right away we can see that we have no evidence whatsoever that the product can help prevent a cold or flu, and no evidence whatsoever that it can treat flu.

The “clinically proven” claim is starting to look at little shaky.

But can it at least treat a common cold? That would be pretty impressive if it could. The common cold has proved remarkably resilient to anything medical science can throw at it. A treatment that actually worked against the common cold would indeed be good news.

The first of the trials was published in 2010. It was an exploratory study in 35 patients who were in the first 48 hours of a cold, but otherwise healthy. It was randomised and double-blind, and as far as I can tell from the paper, seems to have been reasonably carefully conducted. The study showed a significant benefit of the nasal spray on the primary outcome measure, namely the average of a total symptom score on days 2 to 4 after the start of dosing.

Well, I say significant. It met the conventional level of statistical significance, but only just, at P = 0.046 (that means that there’s about a 1 in 20 chance you could have seen results like this if the product were in fact completely ineffective: not a particularly high bar). The size of the effect also wasn’t very impressive: the symptom score was 4.6 out of a possible 24 in the active treatment group and 6.3 in the placebo group. Not only that, but it seems symptom scores were higher in the placebo group at baseline as well, and no attempt was made to adjust for that.

So not wholly convincing, really. On the other hand, the study did show quite an impressive effect on the secondary outcome of viral load, with a 6-fold increase from baseline to day 3 or 4 in the placebo group, but a 92% decrease in the active group. This was statistically significant at P = 0.009.

So we have some preliminary evidence of efficacy, but with such a small study and such unconvincing results on the primary outcome of symptoms, I think we’re going to have to do a lot better.

The next study was published in 2012, and included children (ages 1 to 18 years) in the early stages of a common cold. It was also randomised and double blind. The study randomised 213 patients, but only reported efficacy data for 153 of them, so that’s not a good start. It also completely failed to show any difference between the active and placebo treatments on the primary outcome measure, the symptom score from days 2 to 7. Again, there was a significant effect on viral load, but given the lack of an effect on the symptom score, it’s probably fair to say the product doesn’t work very well, if at all, in children.

The final study was published in 2013. It was again randomised and double blind, and like the first study included otherwise healthy adults in the first 48 h of a common cold. The primary endpoint was different this time, and was the duration of disease. This was a larger study than the first one, and included 211 patients.

The results were far from impressive. One of the big problems with this study was that they restricted their efficacy analysis to the subset of 118 patients with laboratory confirmed viral infection. Losing half your patients from the analysis like this is a huge problem. If you have a cold and are tempted to buy this product, you won’t know whether you have laboratory confirmed viral infection, so the results of this study may not apply to you.

But even then, the results were distinctly underwhelming. The active and placebo treatments were only significantly different in the virus-positive per-protocol population, a set of just 103 patients: less than half the total number recruited. And even then, the results were only just statistically significant, at P = 0.037. The duration of disease was reduced from 13.7 days in the placebo group to 11.6 days in the active group.

There is some evidence that it may help treat a cold. It’s really hard to know whether it does or not from the studies that have been done so far. Larger studies will be needed to confirm or refute the claims. If it does help to treat a cold, it probably doesn’t help very much.

The moral of this story is that if you see the words “clinically proven” in an advert, please be aware that that phrase is completely meaningless.